One of the best things about owning a smoker is that after a while you start to feel like you're wielding skills from a lost age -- an era when people actually made the food they ate. For the first year I owned my smoker I played it pretty safe, mostly sticking to salmon (or trout) and ribs (pork, then beef). The next summer I started to get bored and ventured into pulled pork and smoked meat (which was a monumental bust). Then while drinking beer and loitering around the smoker one day a buddy suggested the Holy Grail of smoked meat: bacon. Long a humble staple of the American diet, it has endured more than a century of fickle culinary trends, only to emerge as something of a reliable heavyweight in the kitchens of the nation.

I love bacon, but have been underwhelmed with a lot of the store-bought variety: it's either too-salty, not salty enough, not smoky enough, or worse, thin and papery - you know, with that cruddy crepe paper texture. So, I sourced some pork belly and tried making some. And man, did it suck! It was way too salty and even though you could taste the smoke, it looked bland and gray when cooked. Like a pork chop.

Humbled, I left this one alone for a while.

Then last year I started rooting around on the internet to figure out what the hell I did wrong. If cavemen and 'mountain folk' had been making their own bacon for generations why couldn't I? Apparently it came down to the curing process. You see, I was trying to cure the bacon without using a curing agent, in this case a curing salt. This was leaving me open to bacteria (the nitrates added to the salt ward these off) and robbing my bacon of that rich red colour that we all associate with it. So, I stepped back up to the plate with a recipe inspired by the great Michael Ruhlman. I aced it this time. Proof below. 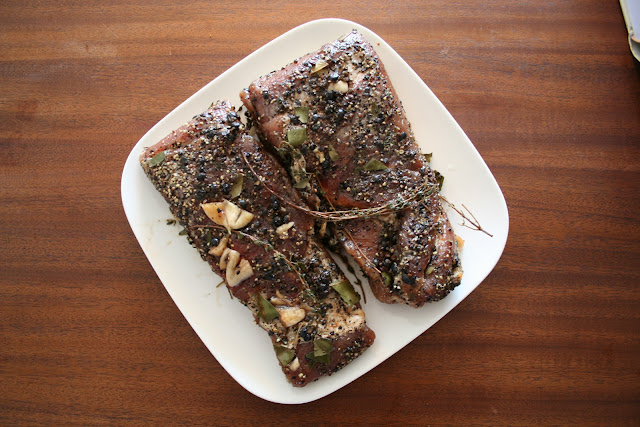 These photos show the anti-biotic free pork belly I bought after about five or six days of being cured in a mixture of kosher salt, pink curing salt (I used Morton's Tender Quick), black pepper, bay leaves, maple syrup, garlic cloves, fresh thyme, coriander and juniper berries. I know -- the juniper berries sound a little esoteric, but if you can find them, use them. They infuse the belly with a fragrant almost boozy aroma that will set it apart from any other bacon you have ever consumed. 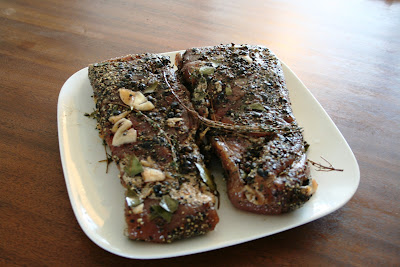 As with any curing or brining process the beauty is that you improvise. What? No juniper bush in your backyard? You poor bastard -- just throw in some blueberries instead. No thyme or coriander? Try tarragon or oregano. It all gets balanced off against the other ingredients, and the smoke, contributing to a complex taste that will stand heads-and-shoulders above that plastic-encased slimey stuff in your grocery store aisle. 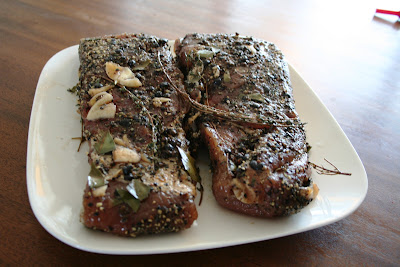 So, once the curing process was complete I removed the belly from the bag it was in and rinsed it off. Here's what it looked like: 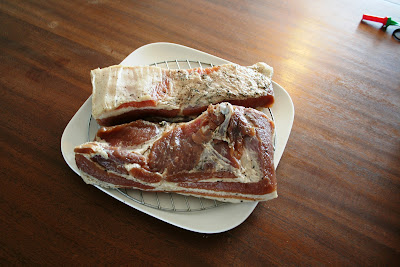 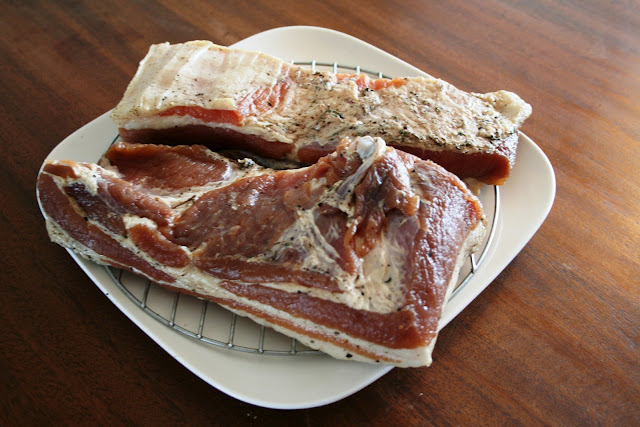 Before I started smoking I sliced a chunk off and fried it up and gave it a taste. It was a bit salty for my taste, so i soaked in a bowl of cold water for an hour or two. (You can blanch it with hot water as well.)

Then I fired up the smoker to a steady 200 F and slid these puppies in for 90 minutes or so, with some cherry wood and hickory. This is what the belly looked like after: 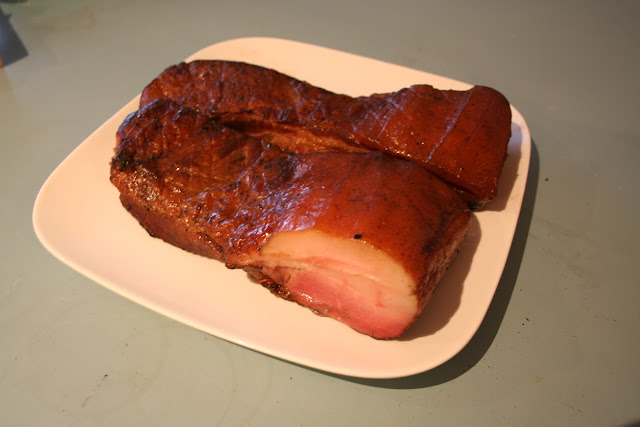 I know -- pretty great huh? But the proof is in the frying/eating right? So after I trimmed some of the fat cap off, I sliced some up (using my meat slicer; which is pretty great to have in instances like this) and slapped them in the frying pan.

What can I say? It turned out great. All the smokey sweetness of regular bacon but with unmistakable undertones of the juniper berries, garlic, syrup and pepper. I hereby declare it The Best Bacon Ever!!! 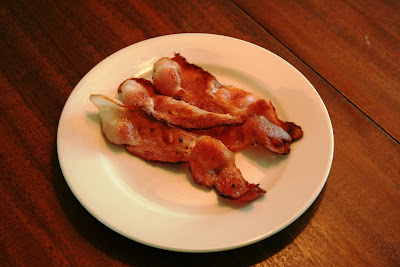 Feeling inspired, I whipped up a bacon and tomato sammy. Or *ahem* The Best Bacon and Tomato Sandwich Ever!!!! Forsooth, bear witness: 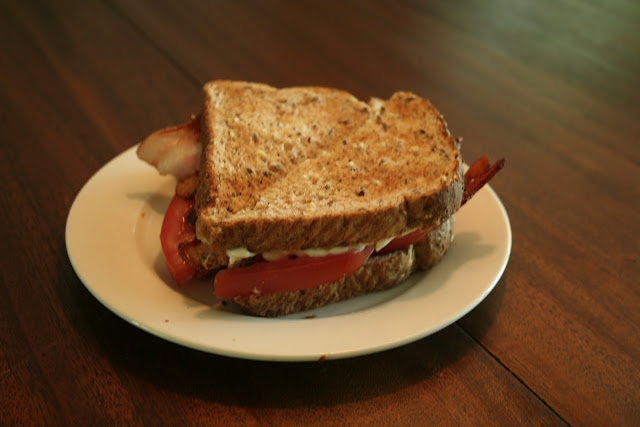 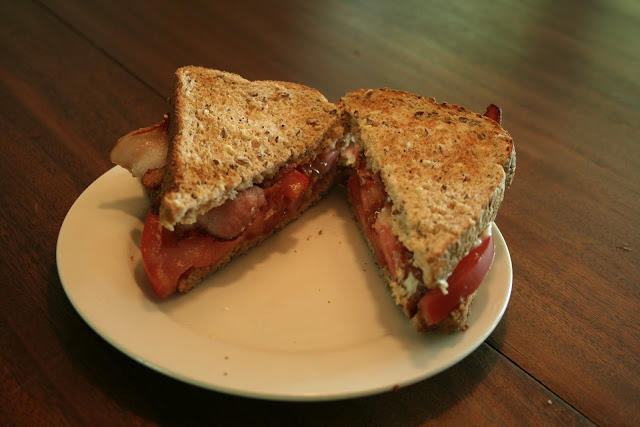 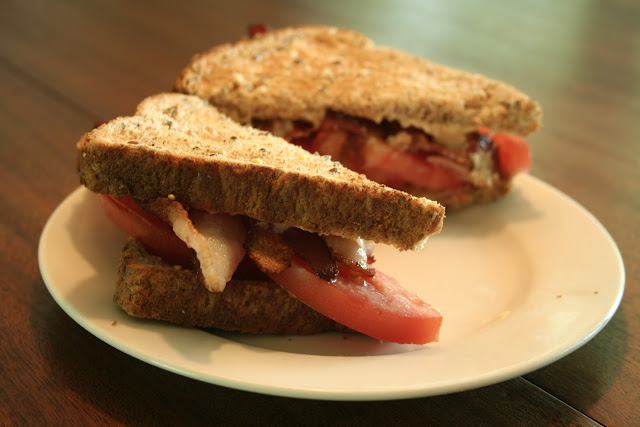 All and all, a great little project that I will likely revisit come Christmas time. Why? Cause bacon + presents = The Best Christmas Ever!!!!!