I usually approach new recipes for ye olde smoker with an ounce of caution, in part because I have so many good ones in rotation already. But when I came across this unique one for smoked pork loin in Extreme Barbeque a couple of months ago, I'll admit my interest was piqued.

Here's the thing: I typically don't stray too far from lower-end, fatty cuts of meat when it comes to smoking. I've tried leaner cuts a couple of times (baby back ribs and a rack of lamb) and the results were pretty lackluster. not sure if it's something about the amount of fat, but in general the pricier the cut of meat the less tasty it seems to turn out. Plus, there's sort of an unspoken ethos among smokers that is all about elevating humbler "lower" cuts of meat into kick-ass creations.  So starting with a blue-ribbon piece of meat seems like a massive cheat.

I have given this recipe a spin twice this year (thrice if you count some pork chops I used) and it has been met with success and high-fives all around. The first time I smoked five pork loins, and if my curious, hungry neighbours can be considered good judges, this one immediately earned a spot on my summer rotation. One pal -- a committed vegetarian -- said it was the single best thing he had eaten in 20 years.

Before you start make sure you give yourself 24 hours. That's the time frame you'll need to complete the brining, rubbing, smoking and glazing that this recipe entails. Sounds time-consuming, I know, but as with all good smoked food most of the time is the meat just sitting in a fridge, brining/curing. That's definitely the case with this recipe.

Immerse your pork loins in a large bowl of cold water that includes equal parts brown sugar and kosher salt or sea salt. Add extra seasoning as desired (here, I've tossed in an onion, a few garlic cloves, some peppercorns and a few bay leaves. celery is good too.) Pop the bowl in your fridge overnight. 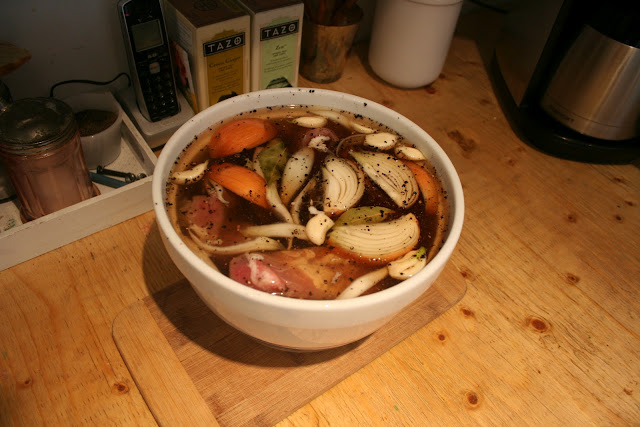 Take the meat out of the brine and pat dry. It'll look like this: 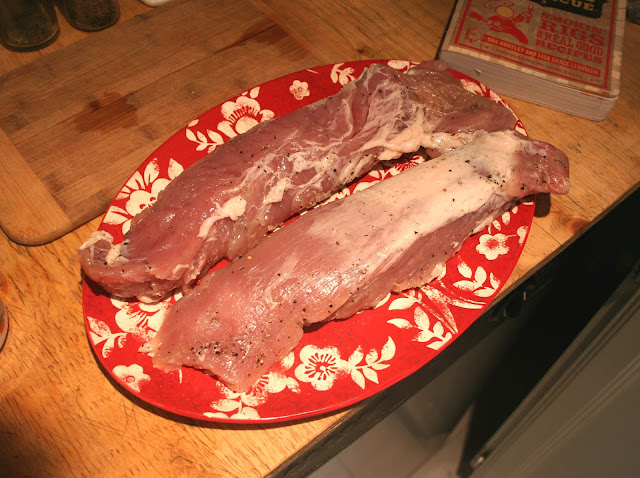 Then apply a dry rub that consists two tbsps each of: black pepper, white pepper, onion powder, garlic powder, paprika and chili powder. If you don't like it spicy reduce the amount of chili powder and replace it with some sugar (white or brown). They should now look like this: 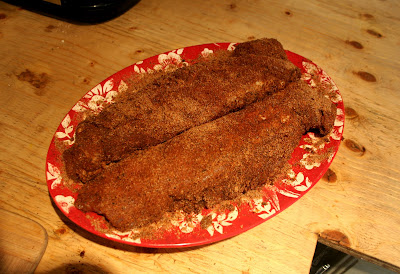 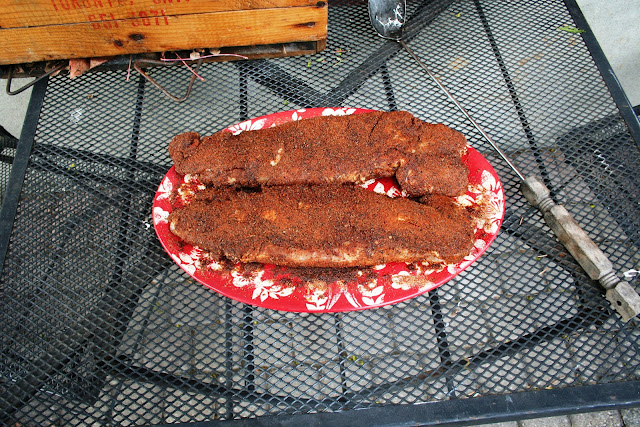 I put these in for about 2.5 hours at a general temp of about 200 F. I opted for some cherry and some apple wood for the smoke. 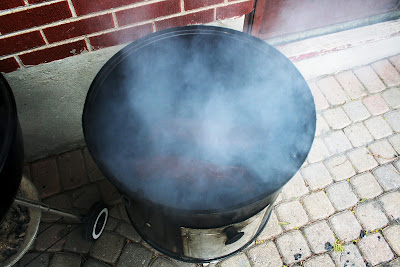 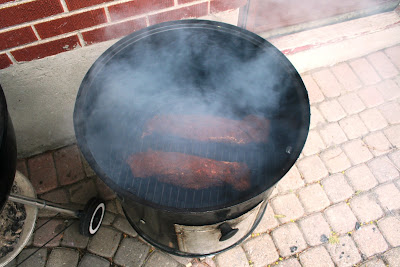 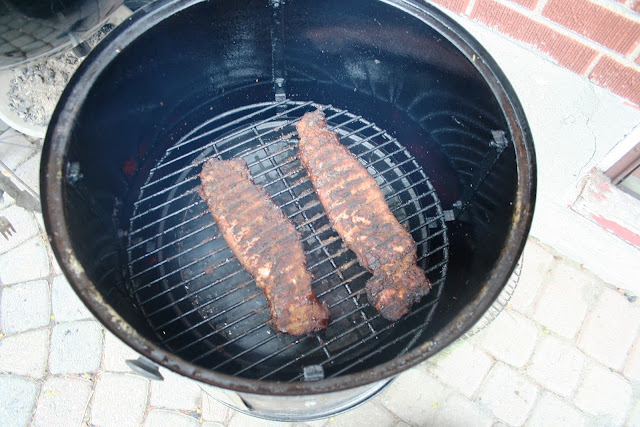 I usually avoid glazes or bastes, but this one is an integral part of the final product with fruity flavours that set off the spice of the rub and the saltiness of the brine really well. Just heat up 1/2 cup fruit jelly (white grape, peach or apple will do) in a pot with an equal amount of BBQ sauce (or ketchup, really), two tbsps of cider vinegar and the juice from 1/2 a lemon.

When the cooking time is about up, slather this mix over the pork -- three to for times each side should do. 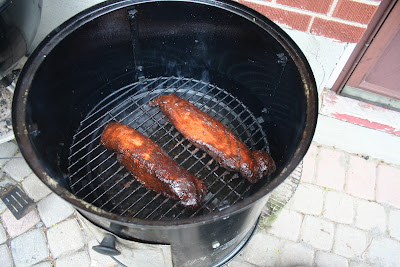 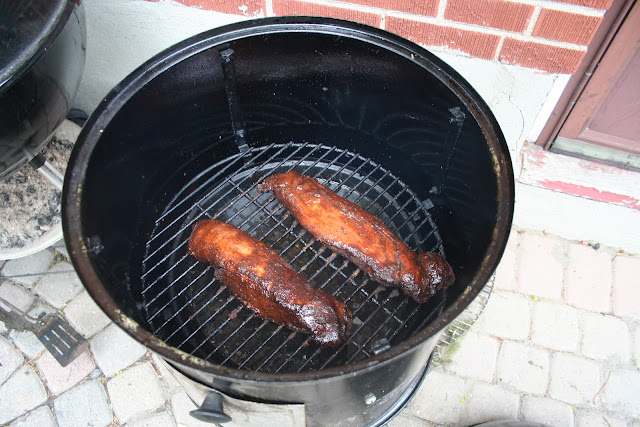 Here's the final product fresh out of the cooker. (The rock glass of whiskey is optional -- though comes highly recommended.) 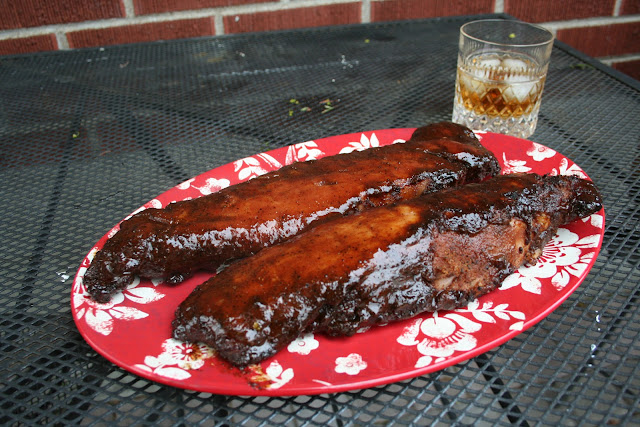 And here it is, sliced and ready to serve. 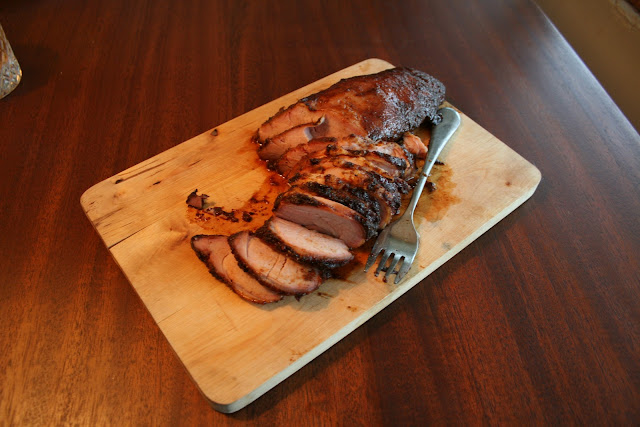 I can't speak highly enough about this recipe. It's great the first night as a main course, and makes for a great sandwich the next day -- especially if you get a little fancy. But more on that in another post. I think the secret here is the brining, which gives the pork a sweet, sugary tenderness unlike any other.

If you try this out, let me know what you thought in the comments below.